San Francisco Fire Department officials are telling Station 49 that Edna, a feral cat that's been visiting the firehouse for the past four years, has to go.

SAN FRANCISCO, CA, FIRE DEPARTMENT - Dalmatians might be the most well-known firehouse mascot, but a tortoiseshell cat named Edna has purred her way into the hearts of firefighters at a San Francisco station.

Edna began visiting Fire Station 49 as a feral kitten four years ago and since then has made the station her home. Now, firefighters are reportedly being told to get rid of her. 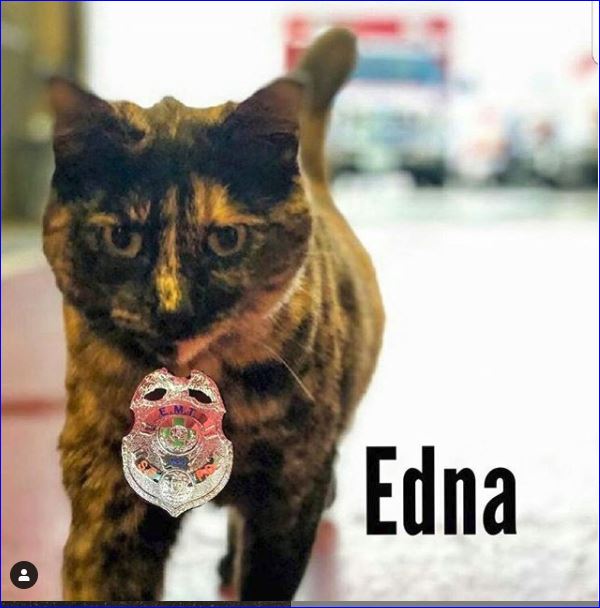 “We slowly started to show her love and care, and she [became] our family,” station employees wrote in an email to SF Gate, adding that the cat helps relieve employees’ stress. “Now she is always there, and is the most docile, loving baby. We take her to the vet now, give her treats and she calls our station home now.”

KGO-TV reported that firefighters suspect an anonymous caller complained about Edna being around firefighting equipment. In response, Fire Department officials have asked the station to remove the cat, according to the news station.

An employee who answered the phone at Station 49 on Monday declined to comment on the situation and referred The Times to a department spokesman. He did not immediately respond to a phone call seeking comment.

Photos on Edna’s Instagram account show firefighters and staff cuddling and petting the feline. Using the hashtag #ednastays, the group is asking the public to send emails to department leaders to convince them to allow Edna to remain at the station.

Employees referred to Edna as the “station angel” in an Instagram post celebrating National Cat Day in October. The photo captured a sleeping Edna curled on a blanket.

Late Monday afternoon, the Fire Department said Edna has been adopted by a member of its ambulance staff.

The department added that it has had a policy prohibiting animals on its property for more than 20 years and that the removal order was for Edna’s own safety.

The Associated Press contributed to this report.