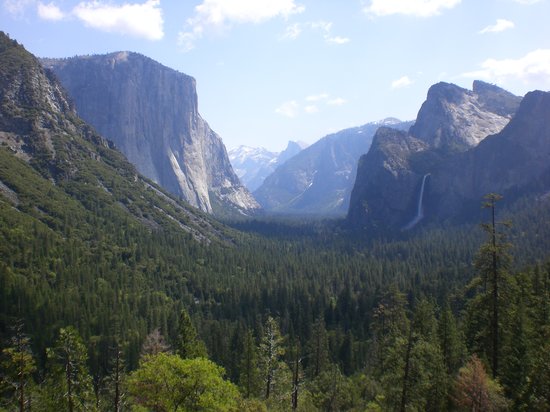 Interested in visiting Yosemite this weekend? There are rooms in Yosemite Valley available for Saturday and Sunday at the Majestic Yosemite Hotel, Yosemite Valley Lodge, and Half Dome Village. For more information on lodging, visit http://www.travelyosemite.com or call 888-413-8869.

“We would like to extend our sincere gratitude to Cal Fire and all of the other agencies who have been working to suppress the Detwiler Fire,” stated Acting Superintendent Chip Jenkins. “Yosemite National Park and our employees are grateful for their hard work and dedication to fight this fire. We are always proud to work with Cal Fire and all of our sister agencies to help support our gateway communities.”

Air quality in Yosemite Valley and throughout the park has been impacted by smoke from the Detwiler Fire. Visitors coming to Yosemite who are sensitive to smoke or suffer from respiratory problems are encouraged to minimize outdoor activities. For updated information on air quality in Yosemite National Park, visit https://www.nps.gov/yose/learn/nature/aqmonitoring.htm

For updated 24-hour road and weather conditions for Yosemite National Park, please call 209-372-0200 and press 1. Updated information is also available on the park’s website at www.nps.gov/yose

Doyle, CA, July 19, 2017 – Firefighters worked around the clock securing the containment lines around the fire. Today the focus is on extinguishing hot spots, patrolling the fire perimeter and beginning suppression repair. The spike camp at Sutcliffe will be closed at the end of shift today.Crews

Suppression repair for the fire will begin on the southeast flank and work northwest working congruently with the Resource Advisors. The focus remains in protecting habitat for the Sage Grouse, Mule Deer, Carson Wandering Skipper butterfly, and the cultural resources in the fire area.

Some unburned islands of vegetation continue to smolder and smoke may be visible from within the burn area. Fire crews are monitoring the fire area.
Please continue to watch for fire vehicles travelling around in the area as crews finish the job of extinguishing the fire and working on suppression repair.
From today on, there will be one update per day.

Current Weather
Weather Concerns
An area of low pressure near the Pacific Northwest will bring gusty southwest winds and low humidity with poor overnight recovery tonight and Tuesday leading to a critical fire weather period. The dry air mass will remain in the region through mid week with temperatures in the high 80s. and the Red Flag warning in effect.

The U.S. Fire Administration (USFA) has received notice of the following firefighter fatality:

Incident Description: Inmate Firefighter Frank Anaya was treated on scene and taken to the hospital in critical condition on July 5, 2017, after suffering a chainsaw injury to the leg while working a fire near Lakeside, California. Fire crews were clearing brush and working with air crews to successfully defend a threatened mobile home park when the injury occurred. Despite all efforts by medical personnel, Inmate Firefighter Anaya passed away on July 11, 2017.

Photo credit: California Department of Corrections and Rehabilitation
Tribute is being paid to Inmate Firefighter Frank Anaya at http://apps.usfa.fema.gov/firefighter-fatalities/

The U.S. Fire Administration (USFA) has received notice of the following firefighter fatality:

Incident Description: Fire Engine Operator William "Bill" Jaros, a crewmember on Engine 312 of the Six Rivers National Forest’s Gasquet Ranger District/Smith River National Recreation Area, was on a conditioning hike with several crewmembers when he became ill and collapsed. Immediate life-saving efforts were initiated by his fellow crewmembers; however, they were unable to revive him. The cause of death is under investigation through the Del Norte County Coroner’s office. Conditioning hikes, such as the one Engine 312 crewmembers were participating, are part of the continuing preparedness routine for firefighters.

Tribute is being paid to Fire Engine Operator William "Bill" Jaros at http://apps.usfa.fema.gov/firefighter-fatalities/