************************************************************
NTSB ANNOUNCES PUBLIC AIRCRAFT FORUM
************************************************************
The National Transportation Safety Board will hold a two-day
forum on safety issues related to the oversight of public
aircraft operations on November 30 and December 1, 2011, in
Washington, D.C.
The event, entitled "Public Aircraft Oversight Forum:
Ensuring Safety for Critical Missions," will be chaired by
NTSB Chairman Deborah A.P. Hersman and all five Board
members will participate.
Public aircraft are operated by a federal, state, or local
government for the purpose of fulfilling governmental
functions such as national defense, intelligence missions,
firefighting, search and rescue, law enforcement,
aeronautical research, or biological or resource management.
Government organizations conducting public aircraft
operations supervise their own flight and maintenance
operations without oversight from the Federal Aviation
Administration (FAA).
"Our accident investigations have demonstrated the risks of
inadequate safety oversight and identified persistent
confusion as to the role of the FAA when it comes to public
use aircraft," said Chairman Deborah A.P. Hersman. "During
the forum, we will gather information on the roles and
responsibilities of the entities engaged in public aircraft
operations and hear about methods for ensuring effective
safety oversight."
Recent NTSB investigations of accidents involving public
aircraft include:
*     the August 5, 2008, accident near Weaverville,
California, involving a helicopter operated by the
U.S. Forest Service on a firefighter transport mission
*     the September 27, 2008, accident in District Heights,
Maryland, involving a helicopter operated by the
Maryland State Police as a medical evacuation flight
*     the June 9, 2009, accident near Santa Fe, New Mexico,
involving a helicopter operated by the New Mexico
State Police on a search and rescue mission
Panelists participating in the forum will represent federal,
state, and local government entities, aviation industry
trade associations, and civil operators contracting with
government entities. A detailed agenda and list of
participants will be released closer to the date of the
event.
The forum will be held in the NTSB Board Room and Conference
Center, located at 429 L'Enfant Plaza, S.W., Washington,
D.C. The public can view the forum in person or by webcast
at www.ntsb.gov.
# # #
NTSB Media Contact:
Bridget Serchak
202-314-6100
Bridget.serchak@ntsb.gov

The Tamarack fire is the most active of the lightning ignited fires. All others are being monitored, patrolled or are staffed.  Warmer weather has settled into the region, with smoke becoming more visible.  A cool weather front, with precipitation, is predicted for the weekend with possible thunderstorms.

Tamarack (37 45.982 x 119 44.436; 7,700’el., Mariposa Co. 9/13). This is fire is at 531.  Short range spotting and runs through vegetation was observed.  Seventy-five % of the perimeter is active. The fire has shifted to the east and northeast following the terrain.  It remains within .2 of a mile of the Tioga Rd. It is approximately 1 mile northeast of Tamarack campground, and near the footprint of the 1988 Walker fire.  Fire crews are removing brush along the Tioga Road and are blacklining (burning out excess fuels) for visitor and firefighter safety and to keep the fire south of the road.   Drivers are urged to use caution, and adhere to posted 25 mph speed limits, and traffic officer instructions when driving in the area of Gin Flat. The Tamarack Creek trail though the fire area is closed.  Smoke is visible from many locations throughout the park, including the Tioga and Wawona Roads, Olmsted and Glacier Points and Sentinel Dome.

Hoffman fire:  This fire has become more active with 3.6 acres having burned, and 30% of the perimeter is active.  It is within 400’ of the Tioga Rd and is visible.

The 14 other lightning caused ignition fires are either out or inactive.

Bishop Creek Prescribed Fire:  This project has been postponed one day for crews to  continue preparing the project.  The primary objective of this prescribed fire is Wildland Urban Interface (WUI) protection. The project is 5,224 acres and is broken into five segments. The 1400 acre Segment A will be the first portion treated. More information about this project will be available on the separate Bishop Creek Prescribed Fire Information update.

When: Friday, Sept. 30
Where: Planned for the eastern end of Santa Clara Road in southeast Atascadero.
Who: Three Cal Fire fire engines and one Cal Fire crew will be involved in the burn.
Why: This burn is a training exercise to give fire crews experience fighting wildfires. According to a Cal Fire news release, non-native grasses and invasive yellow star thistle will be torched.
Smoke: “In the unlikely event you smell smoke, county officials urge you to take precautions and use common sense to reduce harmful health effects by limiting outdoor activities,” according to the news release.
Air quality: The burn is being coordinated with the San Luis Obispo County Air Pollution Control District and the California Air Resources Board and area residents.
“The project is dependent on weather and will be carried out during favorable atmospheric conditions that provide adequate consumption and smoke dispersal,” according to Cal Fire. If conditions aren’t favorable, the burn will be rescheduled.
Posted by Bob Blogger at 9/30/2011 08:35:00 AM No comments:

The three most active lightning ignited fires have experienced moderate growth over the last few days.  All fires are being monitored, patrolled or are staffed.  Thunderstorm activity continued over the weekend, with measurable rain in some locations.  The T-Storms are predicted to moderate through the coming week, with drier and warmer conditions. However, as warmer weather settles into the region, more smoke may become visible.

Wilderness Fire Unit:
Smith (37 55.249 x 119 45.945; 6,300” el. Tuolumne Co. 9/14) It is at approximately 25 acres, with minimal growth over the last few days.  It continues to burn in down and dead logs and duff with moderate fire activity.  Smoke is visible in the afternoons with the southwest aspect drying of available fuels.  Crews are on scene.  The fire remains within the wilderness boundary.  All trails through this area are closed:  Cottonwood Creek, Smith Meadow, Smith Peak, and the Aspen Valley trails.

Tamarack (37 45.982 x 119 44.436; 7,700’el. Mariposa Co. 9/13). Over 101 acres have burned and the fire perimeter is 50% active, with 1’ to 2’ foot flame lengths, burning in red fire duff and forest litter.  It is moving toward the north/northwest. The Tamarack Creek trail though the fire area is closed.  It is approximately 1 mile northeast of Tamarack campground, and near the footprint of the 1988 Walker fire.  Smoke is visible from many locations throughout the park, including the Tioga and Wawona Roads, Glacier Point and Sentinel Dome.  Smoke has the potential to impact the Tamarack Campground in the late evening and early morning hours.  Fire crews will be removing brush along the Tioga Road.  Drivers are urged to use caution, and adhere to posted 25 mph speed limits when driving in the area of Gin Flat.

The other 14 lightning caused ignition fires are either out or are not active.   Other fires may continue to be found during predicted drier weather this next week.

Bishop Creek Prescribed Fire:  This proposed project is mostly in Wilderness and the primary objective is Wildland Urban Interface (WUI) protection.  The project will buffer the communities of Yosemite West, Wawona, Glacier Point Historic District and El Portal, from unwanted wildfire by reducing an over accumulation of fuels.  The project is 5,224 acres and is broken into five segments.  It will build off the recent 1,068 acre Avalanche fire, other prescribed fires and mechanical thinning treatments in Yosemite’s Suppression and Wilderness Fire Management Units.    Additionally, this project is another step in restoring fire dependent forest ecosystems in Yosemite’s lower mixed conifer pine forest.  More information about this project will be available on a separate Bishop Creek Prescribed Fire Information update.   The start date is to be determined, due to the number of naturally caused ignitions within the park.

Quail Fire CA-CDD-13812, the incident is being managed under a single type 3 organization (D. Washington, IC), (60 acres) 85% contained. The Incident is in Jawbone Canyon in the Kelso Valley area Fuel types are juniper and bull pine. Poor access and a possible wind event is anticipated, partial hand line is around the fire. 271 personnel remained assigned. Kelso Valley is 88°, RH 19%, wind 16 mph from the West North West with gusts to 21 mph.

Notes:  Three Hotshot Crews were mobilized to an area below Reno Nevada

THE RED FLAG WARNING IS NOW IN EFFECT UNTIL 11 PM PDT THIS EVENING. 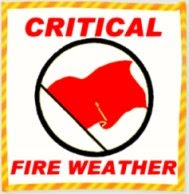 * THUNDERSTORMS... WIDELY SCATTERED THUNDERSTORMS WILL PRODUCE DRY LIGHTNING LATER TODAY...AND CONTINUE THROUGH THIS EVENING.
* OUTFLOW WINDS... ANY THUNDERSTORMS THAT DEVELOP TODAY WILL BE CAPABLE OF PRODUCING WIND GUSTS UP TO 40 MPH.
* IMPACTS... WITH DRY FUELS...ANY LIGHTNING STRIKES WILL BE CAPABLE OF IGNITING A FIRE.
THE POTENTIAL FOR GUSTY OUTFLOW WINDS COULD RESULT IN A RAPID FIRE SPREAD.
Instruction:
RED FLAG WARNING MEANS THAT CRITICAL FIRE WEATHER CONDITIONS ARE EITHER OCCURRING NOW...OR WILL SHORTLY. A COMBINATION OF DRY LIGHTNING...GUSTY OUTFLOW WINDS...AND DRY FUELS COULD CREATE EXTREME FIRE DANGER AND/OR FIRE BEHAVIOR.  PLEASE ADVISE THE APPROPRIATE OFFICIALS OR FIRE CREWS IN THE FIELD OF THIS RED FLAG WARNING.

On Friday, September 23, 2011, the Fremont Police and Fire Department will feature a Public Safety Social Media Live Broadcast utilizing the @FremontPD Twitter account. The Fremont Police Department launched the Twitter account earlier in the year in the continued effort to expand and diversify our outreach efforts. The event Friday is intended to educate and spread awareness to our citizens on the daily efforts of the two public safety departments.

Beginning at 11:00 AM on Friday, September 23, 2011 through 2:00 AM Saturday, September 24, 2011, members of the two Departments will raise awareness by tweeting all public safety calls for service that come into the 9-1-1 center. The hours chosen, correlate with the peak service times. Members of the community are encouraged to follow @FremontPD. We encourage engagement and dialogue from the community during the event. City of Fremont employees will be on hand to respond to comments and questions during the 15 hour event.

During the 15 hour event, you can expect to receive in the range of 200-250 tweets. This is the average number of incidents generated in Fremont on any given day. Tweets will provide real time information including general call type and call dispositions. Fremont Police and Fire Staff will manage the event and be available to answer community questions on-line. The event will be staffed by Chief Craig Steckler, Captain Frank Grgurina, Captain Richard Lucero, Press Information Officer Detective Bill Veteran, Fire Operations Staff Captain Gerry Fogel, Lieutenant John Liu and Community Engagement Manager Geneva Bosques.

Please join us at @FremontPD by going to http://twitter.com/FremontPD. For additional information contact Det. Veteran at (510) 790-6972 or at wveteran@fremont.gov or Community Engagement Manager Geneva Bosques at (510) 790-6957 or at gbosques@fremont.gov.