CALIFORNIA DEPARTMENT OF FORESTRY AND FIRE VISITS CITY’S URBAN FORESTRY DIVISION
On Wednesday, January 13, the City of Santa Clarita provided California Department of Forestry and Fire Protection (Cal Fire) representatives with a demonstration of its tree inventory and Arbor Pro software. Cal Fire selected the City to present the demo to provide state foresters with an example of a city eligible for the state’s Urban Forestry Inventory Grant program.
The City provided examples of how it utilizes Arbor Pro software to manage the health, location and quantity of Santa Clarita’s extensive tree population. City staff also explained how local Urban Forestry efforts benefit the local community in regards to air quality, storm water and energy savings.
“The City is thrilled that the California Department of Forestry and Fire chose Santa Clarita as an example of a City eligible for its Inventory Grant program,” said Mayor Laurene Weste. “Their visit is a testament to the dedication of the City’s Urban Forestry staff toward maintaining Santa Clarita’s tree-friendly status.”
The California Department of Forestry and Fire’s Inventory Grant program provides approximately $1.5 million in grant funding to cities, counties, and districts in need of implementing or adding to an Urban Forestry or street tree inventory program.
For more information on the City’s demonstration to the California Department of Forestry and Fire Protection, please contact Robert Sartain, Arborist for the City of Santa Clarita, at (661) 294-2518 or visit santa-clarita.com.


What:  The base military emergency-services crews will take part in a routine controlled burn.


When: The nighttime training operation is scheduled to begin about 6 p.m. Friday and last for several hours, according to the USMC station's public affairs office.


The prescribed fire is not expected to cause any visibility problems for motorists, officials said.
Posted by Bob Blogger at 1/29/2010 12:25:00 PM No comments: 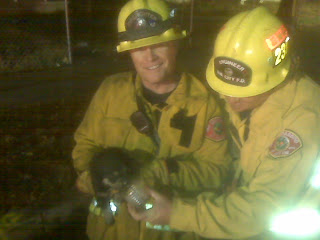 This message was sent using the Picture and Video Messaging service from Verizon Wireless!

To learn how you can snap pictures and capture videos with your wireless phone visit  www.verizonwireless.com/picture.
Note: To play video messages sent to email, QuickTime® 6.5 or higher is required.

Emergency Project to Stop Erosion in Big Sur, Power to be Shut Off

Posted: Jan 28, 2010 9:21 AM PST Updated: Jan 28, 2010 9:51 AM PST
BIG SUR, Calif- An emergency project to prevent the Big Sur River from cutting into the embankment by the Big Sur Lodge/Big Sur Park Campgrounds begins next Monday Feb. 1, Caltrans officials announced.
Alternating lane closures with one-way reverse traffic control will be in effect from 7 am to 5 pm Mondays through Fridays for two weeks with closures primarily on the northbound side. Up to 10-minute delays are anticipated. There will be a closure this Friday, Jan. 29 from 9 am to 3:30 pm to deliver the rocks to the site and set up for next Monday's work.
There are power lines in the way so PG&E will be shutting down the power during work hours for the two-week project since there are strict specifications on the placement of a crane in relation to overhead power lines. PG&E will be notifying residents/businesses from the Big Sur Lodge/Big Sur Park Campgrounds south to the County Line informing them of the electricity shut off while work is taking place.
The project is necessary as the Big Sur River is rapidly eroding the hillside. Big rocks, approximately 5' x 5' x 5' will be placed via crane in the river to keep it from further cutting into the roadway embankment.
Granite Construction of Watsonville is the contractor for this $925,000 emergency project.

The number of fire engine companies at 13 of San Diego's 47 fire stations - including the one at Eastgate Mall and Genessee Avenue - will be reduced on a rotating basis starting next week, as part of budget cuts recently adopted by the City Council.

No fire stations will be closed as a result of the so-called "rolling brown-outs," but fire stations with multiple crews will be reduced to a single crew and their engines will be idled, according to a five-page plan released by the city.

First District Councilwoman Sherri Lightner told the La Jolla Town Council last week that the plan could affect La Jolla firefighters who may have to shift to backup at Station 35 in University City.

The plan, which takes effect Feb. 6, will save the city about $11.5 million due to a reduction in overtime.

Councilwoman Marti Emerald said the plan could mean it will take longer for first responders to arrive at an emergency.

"These engine closures represent an additional 13 percent reduction in available fire crews and equipment," Emerald said in a statement. "We are patching the budget deficit by cutting public safety services. We should all be concerned about this."

According to Emerald, 22 fire stations in San Diego already fall short of a national standard for response times.

The brown-outs were included in Mayor Jerry Sanders' recent plan to close a $179 million budget shortfall. The City Council approved the budget cuts in December.

The impacted San Diego Fire-Rescue Department stations include Station 21 in Pacific each, Station 35 in University city, Station 40 in Rancho Penasquitos and Station 44 in Mira Mesa as well as others across the city.


Mr. Johnson had many prior run-ins and complaints with his neighbors and coworkers, This was wanton premeditated killing and a disgrace to his badge he should be sentenced to the maximum allowable under law!

CAL FIRE is most often highlighted in its role as a wildland fire fighting agency, but CAL FIRE is also a leader in flood response.
Posted by Bob Blogger at 1/26/2010 11:30:00 AM No comments:

USA-2 UPDATE:  Angeles County Fire Tech Services on Facebook reports that USA-2 UPDATE: All team members are curently at the Base of Operations; after a day of activities, primarily providing humanitarian support. Team members are reported to be in very high spirits as they look forward to a potentially soon demobilization date.

The impact of a large rock caved in part of the driver’s-side windshield of one of the Vancouver Fire Department’s ladder trucks as it returned from a call in east Vancouver early Saturday.

The impact of a large rock caved in part of the driver’s-side windshield of one of the Vancouver Fire Department’s ladder trucks as it returned from a call in east Vancouver early Saturday.

A Vancouver Fire Department ladder truck crew had a narrow escape early Saturday when someone hurled a large rock into the massive vehicle’s driver-side windshield.
None of the four firefighters on board were injured, according to Vancouver firefighter-spokesman Jim Flaherty. But he said the incident easily could have turned out worse.
“The reality of it is, if had it gone a foot either way and if something happened to the driver, then we’d have gotten into a vehicle control issue,” Flaherty said. “An out-of-control or incapacitated driver of a ladder truck is going to have a bad result for the other people inside and whatever else that multi-ton ladder truck comes into contact with, whether it’s another vehicle or a building.”
Police are investigating.
The ladder truck crew, which was returning from a 911 call in Orchards, was driving south in the 4100 block of Northeast 112th Avenue at 1:35 a.m. Saturday at the time of the incident, Flaherty said.
The rock, which weighed 2-3 pounds, caved in a section of the driver’s-side windshield. Flaherty said the crew didn’t see who threw it. “It happened so quickly,” he said.
At 56 feet, the ladder truck is so long that it needs a tiller-man at the rear of the apparatus to to help steer the vehicle around corners. It weighs 31 tons.
“The driver did a heck of a job getting it stopped safely,” Flaherty said.
Flaherty, who called the incident “extremely stupid and extremely dangerous,” said the damaged truck will be out of service until it can be repaired. With a reserve ladder truck already out of service, the incident leaves the city with only one working ladder truck.
The Vancouver Police Department asked that anyone with information regarding the incident to contact Cpl. Doug Rickard at 360-487-7535.
“We believe somebody knows something about this,” Flaherty said. “Now, with all of the east side of the community without a ladder truck, we’re looking for somebody to really step up.”