A defense motion asking for 14 more people to be arrested in connection with the fatal Oakland warehouse fire in 2016 was denied by the judge in the case. 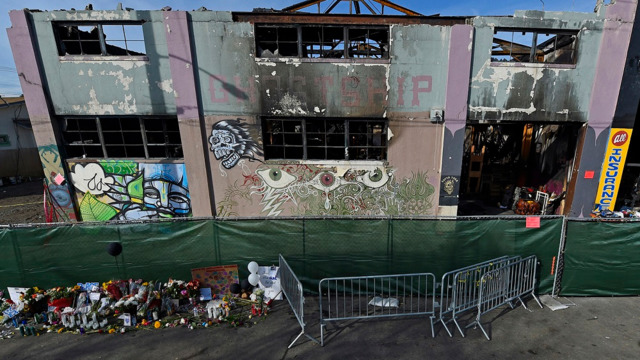 The view outside the scorched Ghost Ship warehouse building in Oakland, CA. The blaze tore through the two-story building on the 1300 block of 31st Avenue, killing 36 people. JOSE CARLOS FAJARDO/BAY AREA NEWS GROUP/TNS

OAKLAND, Calif. — It’s a rare move to see defendants ask for more defendants to join them in a criminal case, but a judge denied a motion Monday asking for 14 more people to be arrested in the Ghost Ship fire case.

Attorneys for defendants Derick Almena and Max Harris filed the motion to compel a citizen’s arrest, which called for the arrest of 14 others for the fatal Dec. 2, 2016, warehouse fire in East Oakland that killed 36 people. Included in the list was landlord Chor Ng, and her children Eva and Kai Ng, who served as building managers.

The motion itself alleged probable cause to arrest the list of 14 people, who in the months and years leading up to the deadly fire had all been inside the warehouse itself either as inspectors or partygoers, and knew of the dangers inside. The list includes a building inspector, a Child Protective Services agent, fire department members and Oakland police officers who responded to calls at the warehouse, named the Ghost Ship.

Although Judge Trina Thompson said Monday that she was “intrigued” by the motion in this case, she pointed out that the judicial branch did not have the power to bring charges against anyone.

Just before denying the motion after lengthy arguments by both the prosecution and the defense, Judge Thompson also pointed out that her ruling did not preclude the defense from bringing evidence on a third-party culpability. This defense strategy is used by attorneys to present evidence that points to another person or people, besides the defendants themselves.

Prosecutor Autrey James argued that there was insufficient evidence so far to bring charges against the Ngs “beyond a reasonable doubt,” which is the standard of proof in criminal cases.

District Attorney Nancy O’Malley herself told this newspaper last year that prosecutors could not “pin that” responsibility on the warehouse owner, the Ng family. But she also said prosecutors have not given up the possibility, if some new evidence comes to light.

James also argued that the arrest of individuals is a “discretionary act,” and that arrests cannot be ordered.

Almena’s defense attorney, Tony Serra, pointed the finger at politics and a public relations firm for the lack of arrest of others besides his client.

“There is a white elephant in the courtroom that no one is acknowledging … that this is a political case,” Serra said.

Serra referred to the alleged $90,000 hiring of Sam Singer, a well-known crisis manager who has a public relations firm based in San Francisco. Serra maintained Singer was hired to influence prosecutors so that the Ng family, fire department, inspectors and others would not be charged. Serra said it was “obvious” that the landlords should be charged.

Singer told this newspaper in January that he was hired to represent the Ng family to assist in communication issues surrounding the tragedy.

“I’m honored that anyone would speak so highly of my work, but there’s no truth in me making charges go away,” Singer said in January.

Tyler Smith, an attorney who represents Harris, said in his arguments Monday that Eva Ng knew when the lease was being signed for the warehouse by Almena and others that the use of the building was being changed. The warehouse, formerly used for dairy storage, was to be used for an artist warehouse, for public outreach and gatherings. Because the owners themselves had the legal duty to make sure the warehouse was safe, everything can be traced back to Eva Ng, Smith argued.

He said if the Ngs had properly followed the rules, the building would have had sprinklers, illuminated exit signs, smoke detectors and other safety measures that the prosecution has argued for against Harris and Almena, Smith said.

Smith also said her brother, Kai Ng, was told that people were living at the warehouse.

As reported by this news organization, police had visited the warehouse a year before the fire and knew of illegal parties. There were also reports from witnesses that firefighters from a nearby station had not only entered the Ghost Ship but also had attended a party there. An off-duty firefighter also attended his wife’s work holiday party there, according to records.

But the prosecution has maintained that it was the reckless actions of Almena and Harris that caused the deaths of the 36 people trapped inside the warehouse.