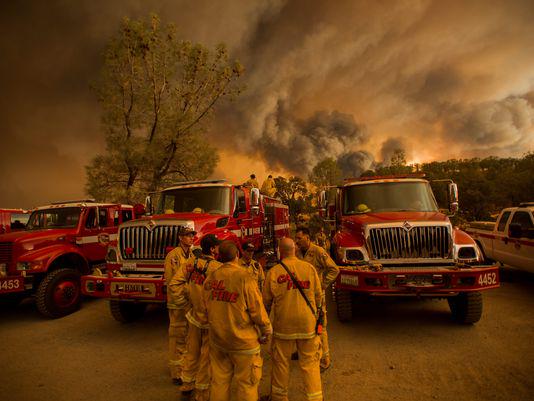 With the nation still at wildfire preparedness Level 5 — the highest there is — and spending $ 150 million per week fighting fires, Australia and New Zealand are sending firefighters to help battle wildfires burning in the western United States.

The United States has also sent its own firefighters to these countries when they need aid: 67 to Australia in 2007 and 73 in 2009.

Details are still being worked out, but the firefighters are expected to arrive in Boise on Sunday. After a one-day orientation to learn about current fire behavior they will be assigned to large fires.

This is not the first time that the United States has relied on firefighters from so far away. There’s a history of such international collaboration with Australia and New Zealand, going back to the year 2000, which the National Interagency Fire Center says is “the first time their firefighters fought fires on American soil.”

The last time the U.S. asked for help from Australia and New Zealand was in 2008.

Boise, Idaho – Top wildland fire managers at the National Interagency Fire Center (NIFC) in Boise, Idaho are mobilizing firefighters from Australia and New Zealand to assist with wildfire suppression efforts in the western United States. Australia and New Zealand have been key partners with the U.S. fire community for more than 50 years but were last mobilized in 2008 when severe fire activity was similar to this year.


The National Multi-Agency Coordinating Group (NMAC) comprised of top fire managers representing the Bureau of Land Management, Bureau of Indian Affairs, the National Park Service, and the U.S. Fish and Wildlife Service, the U.S. Forest Service, the U.S. Fire Administration and the National Association of State Foresters, requested approximately 71 fire managers and specialists. Although final details of the arrangement are being worked out, the contingent from Australia and New Zealand is expected to arrive in Boise, Idaho on August 23 for a one-day induction to learn about current fire behavior, fuels and weather conditions. Upon completion of this orientation, they will be assigned to large fires that are currently burning.


“We are very appreciative of the Australian and New Zealand firefighters for their availability to assist us with our current fire situation,” said Aitor Bidaburu, Chair of NMAC. “We currently remain at National Preparedness Level 5, our resources are fully committed and there are no season-ending weather events in the foreseeable forecast. Because of the current level of commitment and forecast, having fire management expertise from Australian and New Zealand firefighters will be of tremendous help as we continue suppressing ongoing fires.”


The National Preparedness Level remains at 5, the highest level, indicating a high level of wildfire activity and a high level of commitment of available wildfire suppression assets, such as firefighters, aircraft, and engines. Weather and fuel conditions are predicted to continue to be conducive to wildfire ignitions and spread for the next few weeks.


In addition to the Australia and New Zealand support, Canadian firefighting assets are currently assigned to the Northern Rockies Geographic Area. Five wildland fire suppression crews from Ontario, Canada and one Convair 580 airtanker group from both Saskatchewan and Alberta are supporting fire suppression efforts in Montana and northern Idaho.