Kevin Woyjeck, son of an LA County fire captain, was one of 19 firefighters killed during a June 30 wildfire in Arizona

One of 19 members of the Granite Mountain Hotshots team killed last month in an Arizona wildfire was remembered at his funeral service Tuesday as a "courageous" firefighter devoted to protecting others. 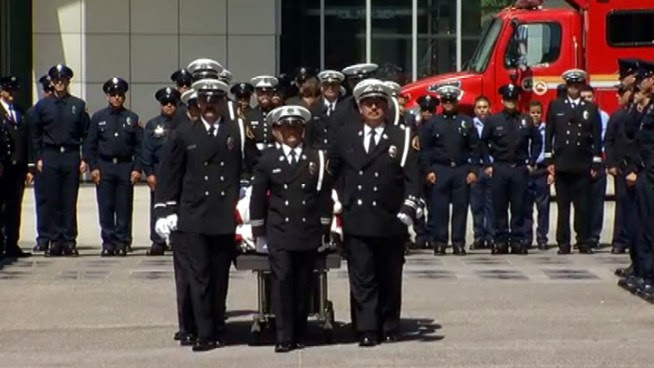 Kevin Woyjeck, the 21-year-old son of Los Angeles County Fire Capt. Joe Woyjeck, and 18 hotshots team members died June 30 when they were over-run by the Yarnell Hills fire northwest of Phoenix. Hotshots crew member Brendan McDonough, the lone survivor of the firefight, was at Tuesday's service at Christ Cathedral in Garden Grove.
Hundreds of fire service personnel and member of other public safety agencies joined Woyjeck's family and friends at the service.
Los Angeles County Fire Chief Daryl Osby, who worked with Woyjeck's father, spoke at the service.
"Each of us has a script when we're born," said Osby. "Kevin Woyjeck's script brought us here.
"Kevin knew what he wanted to do. He exhibited the courage, strength, bravery and the sacrifice to become a proud protector of life and property. He was just like his father. He was caring, committed, fun-loving, courageous, inspirational -- a person of character and an awesome young man."
Bobby and Maddy Woyjeck, his younger siblings, also spoke about their memories of an "amazing" brother. A gallery of images dating from Woyjeck's childhood was presented on a monitor.
"We were supposed to do a lot of things together," said Maddy. "He was an amazing person on the inside and out. Everybody fell in love with that kid because he was just so fun to be around.
"I just wanted him to see me graduate -- that's the biggest thing. He meant the world to me."
Bobby Woyjeck told mourners that wherever his brother went, he followed. The two brothers spoke together on the phone and Bobby visited him in Arizona.
"He was my best friend," said Bobby Woyjeck.
About two hours before the service, Los Angeles County Sheriff's deputies assigned to Lakewood Station concluded a 24-hour memorial for Woyjeck. Deputies stood guard in full uniform outside Los Angeles County Fire Station No. 23.

Woyjeck's remains arrived in Southern California last week after a public memorial for the 19 victims in Prescott that was attended by many of the people the firefighters died trying to protect.
Capt. Woyjeck was embraced by other firefighters at the July 9 memorial, during which the lone surviving member of the Granite Mountain Hotshots recited the Hotshots Prayer. Mourners inside Prescott's Tim's Toyota Center and those in an overflow viewing area set up outside in front of a big-screen monitor stood in ovation as firefighter Brendan McDonough approached the stage.
Vice President Joe Biden and Arizona Gov. Jan Brewer spoke at the service.
Woyjeck's remains were escorted with full honors by the Los Angeles County Fire Department to Forest Lawn mortuary in Long Beach. Internment will follow Tuesday's service in a private ceremony.
Woyjeck began his firefighting career as a Fire Explorer, part of a training mentorship program. He worked as an emergency medical technician. He worked as a wildland firefighter in South Dakota before joining the Granite Mountain team in April.
Two of Kevin Woyjeck's uncles also were firefighters.
The June 30 deaths marked the deadliest wildland fire since 25 firefighters were killed as they fought the 1933 Griffith Park fire.
Source Article: http://www.nbclosangeles.com/news/local/Firefighter-Funeral-Granite-Mountain-Hotshots-Arizona-Wildfire-Woyjeck-215661671.html
---------------------------------------------