CAL FIRE crews creating fuel breaks in Tuolumne-Calaveras to reduce the spread of wildfires.These fire breaks provide a fire barrier and help slow a fire's spread, also allowing fire crews to safely access the area in the event of a wildfire. Learn more about this project and others happening in the coming months: 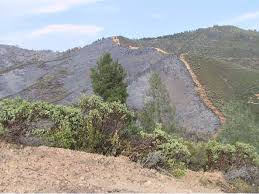 By Lacey Peterson / The Union Democrat
Published Mar 22, 2016 at 12:23AM
“It’s preventive maintenance. You can either change the oil in your car, or you have total engine failure. All this work prepares us for fire season.”
— Jeff Sanders, division chief at Baseline Conservation Camp
Fire breaks are an important tool used in stemming the spread of wildfire, especially during drought years.
Crews have been working the past two months to maintain an important fire break that runs along the top of Big Hill bordering Cedar Ridge. It’s part of a system of fire breaks that runs from Columbia to Mount Elizabeth, and it played a crucial role in preventing the spread of the Oak Fire late last summer.
A fire break is a swath of land, usually along ridge tops, that is 200 feet wide and often miles long, where dead and downed trees, as well as all litter-like branches, pine needles and other highly flammable materials, are removed. A break is intended to slow a fire’s spread.
The fire break on Big Hill has been a project of the Highway 108 Fire Safe Council, which works as the liaison between private landowners and fire crews to get access and grant funding for work to be done, said Adam Frese, the Unit 4 forester for the Cal Fire’s Tuolumne-Calaveras Unit.
There are several fire safe councils in the Mother Lode made up of volunteers who work to get fire safety projects funded, approved and completed with the cooperation of private landowners and government agencies.
The years-long drought coupled with bark beetle infestations have caused a large number of trees in the fire break area on Big Hill to die.
Drought-stressed trees don’t produce adequate sap to repel the bugs, which eat the cambium layer between the tree and the bark, explained Frese and Jeff Sanders, division chief at Baseline Conservation Camp.
Ponderosa pines, incense cedar, live oaks and black oaks on Big Hill have all been affected. The Ponderosa pines were most heavily affected by beetles, Frese said.
“We haven’t seen this amount of dead trees to deal with before” in a fire break, Frese said.
Baseline crews are doing the work on Big Hill and were out last week cutting down dead trees, clearing land and manning burn piles. The fire break is about 250 acres total.
Money from the state’s annual fire-prevention tax is funding the maintenance, Frese said.
The Big Hill fire break is one of several projects fire crews and fire safe councils have on the spring clean-up schedule. It was chosen because of the high number of dead and downed trees, Sanders said.
“We want to go into this fire season with good fire breaks and good conditions,” Frese said.
Another goal in a fire break is to remove “ladder” fuels so fire will stay on the ground. The lower limbs of trees are removed to about 8 feet high, and trees are spaced out.
Forests are pretty overcrowded compared to historic times when either nature or American Indians burned forests more often.
Historically, forests had about 40 trees per acre, whereas crowded forests have about 400 trees per acre. A more open canopy allows more sunlight to penetrate the trees and the area, which is more natural and healthy for the forest Frese explained.
Last week, the top of Big Hill near Old Oak Ranch Road and Northridge Road was quiet, save for the whir of chainsaws and distant dogs barking. Smoke rose from several small burn piles.
Trees that were felled were saved, de-limbed and stacked neatly so property owners could sell them to a lumber mill or to be used as biomass or fire wood.
“We want to get it cleaned up so it’s cleaner and fire safe for homeowners up here,” Sanders said.
During the Oak Fire, the existing fire break played a critical role in stopping the fire, and was used by emergency personnel to evacuate about 400 people from the area, including those at Old Oak Ranch and Sierra Outdoor School. The Sierra Outdoor School had previously secured funding to gravel a road that allowed school buses to get out. That was done in 2011 or 2012, Sanders said.
“When you need a fuel break, you need to think ahead five or six years,” Sanders said.
There have been about 28 to 30 people working on the Big Hill break since Feb. 3, Sanders said.
Another fire crew is working along Tuolumne Road in cooperation with the Tuolumne County Road Department and PG&E.
There are eight tree mortality projects scheduled through June 30 in Tuolumne County, Frese said. Those include firebreaks near Cattle Drive Trail between Italian Bar and Yankee Hill roads; Mount Havilah behind Tuolumne; Tuolumne Road chipping projects; North Bald Mountain between Covington Mine and the Hatler Mill; Sierra Outdoor School behind Cedar Ridge to Pack Trail; Highway 120 corridor; and the Rim Fire contingency line from Apple Colony Road in Tuolumne to Long Barn.
Making good fuel breaks gives firefighters a foothold in communities to get crews in safely, Sanders said.
“It benefits the whole community. Cal Fire is taking an aggressive approach to tree mortality,” he said.
Because of the fire break on Big Hill, crews were able to “catch it right there,” Sanders said.
While no two fires are alike, an example of not having fire breaks and a fire spreading can been seen with the Butte Fire.
During the Rim Fire, the fire break from Tuolumne to Long Barn was successful in helping crews to keep the fire from spreading even further.

Sanders pointed to the cleared-out fire break on Northridge Road.
“I would feel safe backing a crew up in here,” he said.
He pointed to an area on the other side, filled with forest litter and dead trees and said, “I wouldn’t put them in that.”
Fire breaks allow aviation crews to see crews on the ground through the canopy and where hose lines have been placed. You can safely drop retardant without worrying it’s going to knock the top of a dead tree onto a firefighter, Sanders said. “It adds safety from all levels.”
Fire breaks are the same principle as having 100 feet of defensible space around homes.
It gives firefighters a safe anchor point to get in and move around, and they protect the homeowner, the home and the neighbors.
“It’s preventive maintenance. You can either change the oil in your car, or you have total engine failure,” Sanders said. “All this work prepares us for fire season.”
Traditionally, fire season is from May to November, but with the drought, it’s been year round, Frese said.
Editor — The name of Adam Frese has been updated to reflect a corrected spelling.
Photo: CAL FIRE Website
SOURCE: http://www.uniondemocrat.com/localnews/4148493-151/fire-crews-work-on-big-hill-fuel-break#