Although the peak of fire season appears to be behind us, there are members of the wildland fire community still in need. The Wildland Firefighter Foundation (WFF) plays an integral role in meeting this need by providing support to those who sustained injury and to the families who have lost loved ones.

In recognition of the importance of the WFF, a group of cyclists, comprised of current and former wildland firefighters and community members, based largely in Colorado's Front Range came together in support of the WFF  and created Team Wildland Firefighter Foundation (click for Team page). The official mission of the team reads as follows: "To raise awareness of the Wildland Firefighter Foundation by building and strengthening relationships between those who love and recreate in the public lands and the wildland firefighters who protect them through the common activity of cycling." Team Wildland Firefighter Foundation (Team WFF) formed only after the approval from the WFF, who Team WFF maintains a close and active relationship with. Since their formulation in December of last year, Team WFF has participated in events such as 18 Hours of Fruita, the City Streets Criterium, the Dirty Kanza, the Firecracker 50, and a multitude of training rides. 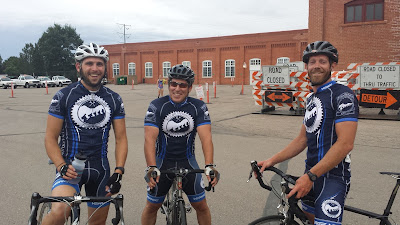 Team WFF members at a race this summer.

In support of the Wildland Firefighter Foundation, on November 21, Team WFF will be teaming up with Boulder, Colorado’s Twisted Pine Brewery for their monthly Party With A Purpose charity event. Team WFF will be holding a morning group road ride, presentations, raffle and silent auction, in addition to being on-site throughout the day to interact with attendees. Look for more updates on this event through our social media outlets.

Team WFF recently launched a Booster Campaign in support of the Wildland Firefighter Foundation titled “Spreading Compassion” which can be viewed here. The campaign has been successful, both in shirt sales and in raising additional donations that can be given to the WFF and then used to support those in need. Team WFF would like to thank everyone who has participated in this campaign so far and once again recognize how strong and compassionate the wildland fire community is. The campaign will be open for a while longer, shirts are only 15 dollars and proceeds will support the WFF.

Thanks for reading, we hope to see you on the line and on the trail,
Team WFF