Week After Death, Crews Rescue 2 Women in Falls on Hikes at Eaton Canyon
A woman was hoisted out of Eaton Canyon on Saturday after falling


On the day a girl who died in a hike in the San Gabriel mountains was remembered at a memorial service, two women had to be rescued after falling on the same trail.

Rescue crews worked on Saturday to rescue the women on the Eaton Canyon trail. 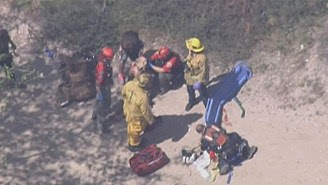 A woman was wounded during a hike on an Eaton Canyon trail on Saturday, March 30, 2013. In this file photo, rescue crews tend to wounded hikers on Friday, March 22, 2013 on the same trail, which is in the foothills of the San Gabriel Mountains, in Pasadena.

One woman in her 40s fell at the first waterfall at Eaton Canyon Park, said Lisa Derderian, a spokeswoman with the Pasadena Fire Department.

She had a minor nose injury and felt dizzy, so search and rescue crews called in a helicopter to hoist her out.

At same time, a call came in of a woman in her 20s who hurt her ankle closer to the Nature Center and parking lot.

She was taken to a hospital.

The trail was full on Saturday with hundreds of hikers during Easter Weekend.

The news comes after the death at the trail of Esther Suen on March 22 and a public safety message by police and fire agencies warning about the trails dangers.

Bernard Spencer, of the Los Angeles County Fire Department, said firefighters are dispatched to the trail up to 20 times a month.

Suen was with several other friends on a spring break hike when she died. An 18-year-old man who was with her was injured.