By Jason Kandel and Joel Grover 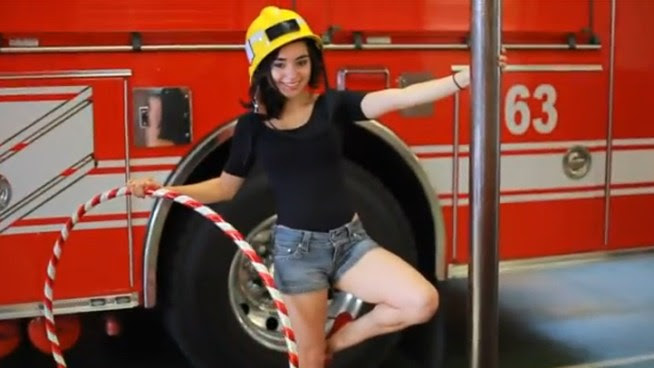 The same Venice fire station embroiled in porn controversy last year when the NBC I-Team exposed it for allowing one of its fire trucks to be used in a video shoot is under investigation again, this time for a racy video that was apparently shot inside the station.
A video that was uploaded to YouTube last week features a woman in short shorts and red high heels dancing around a pole with a Hula Hoop in the Venice Fire Station 63.
The woman in the video can be seen wearing what appears to be fire department overalls and a yellow helmet. The helmet does not have an L.A. city insignia, but instead what appears to be black tape with no visible L.A. city markings.
Viewers can see the number "63" on the side of a fire truck in the background.
The 1:22 minute video called “Firehouse Burlesque Hula Hooping,” is an ad for Hoopnotica, a workout program, based in Venice.
At one point during what appears to be a firefighter slightly blurred wearing a fire department baseball cap and blue shirt jokingly dancing with the Hula Hoop.
Los Angeles Fire Department spokesman Jaime Moore, who said he hadn’t seen the clip, said the department has launched an internal affairs investigation into the video.
Lauren Brand, a spokeswoman for Hoopnotica, said the video was shot within the last 30 days at the Venice fire station, which is a couple of blocks from the Hoopnotica headquarters.
Brand said the women in the video are part of Hoopnotica’s “street team,” who go out to promote “hooping” for physical fitness.
“We were walking around the neighborhood,” Brand said. “The girls saw the door of the station open and walked in.”
They asked firefighters if they could shoot a “hooping video” in there and the firefighters agreed, Brand said.
“It was totally spur of the moment,” she said. “It was all lighthearted fun. I hope we didn’t get anyone in trouble. It was just clean, American fun.”
She confirmed that there were firefighters in the video and the uniforms were city issued.
NBC4 broke the news of an earlier investigation at the station that said several firefighters allegedly allowed porn producers to use their fire engines in two adult movies for a video in 2008.
In April, NBC4 LA revealed how two LA traffic cops from the LA Department of Transportation appeared in a porn movie.
In the Fire Department case, nobody was disciplined because the department’s 2-year statute of limitations in such cases had expired.
In the DOT case, one officer was fired and another disciplined as a result of the city investigation. Parking Enforcement Chief Jimmy Price retired two years ahead of schedule.

VENICE, Calif. – A California firehouse is in trouble again after letting an exercise company shoot a video there showing a scantily clad woman dancing seductively with a Hula-Hoop.

The video shot at a Venice fire station was intended to promote classes at Hoopnotica. It shows a woman in shorts and heels undulating with a Hula-Hoop and later in a firefighting uniform.

Hoopnotica spokeswoman Lauren Brand says the company shoots similar videos in different locations every week. She says the company regrets the attention and that its employees were just having fun with local heroes.