CAL FIRE: Investigates Fire in the Sky and Sonic Boom

CAL FIRE was sent out today to investigate reports of fire in the sky, As very loud and wide ranging sonic boom was heard over Central California and the Sierra's.
911 reports in the two states of California and Nevada reported seeing a fireball streak across the sky at the same time. 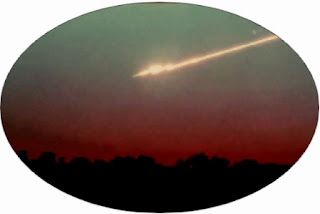 Where: The ground shaking explosion was heard by residents in El Dorado, Amador, Calaveras, Tuolumne and San Joaquin counties. Dan Ruby of the Fleischmann Planetarium at the University of Nevada, Reno, said the reports indicate the meteor broke up above Earth somewhere over the Sierra southwest of Reno.
The explosion rattled windows and shook houses from Reno to Winnemucca in Nevada, and from the Sacramento to Bakersfield areas in California. Some people in the two states reported seeing a fireball streak across the sky at the same time.
Who: Numerous 911 callers reported seeing a meteor over the Sierra sky at approximately 7:45 a.m. some callers further reported resultant smoke plumes.
CAL Fire spokesperson Daniel Berlant said they received several calls about the lengthy sonic boom and sent spotter crews out to investigate. One caller in Camino reported seeing a column of smoke after he saw the meteor.
What: National Weather Service's Craig Shoemaker said the boom was due to "a meteor that originated from a debris cloud from the Thatcher Comet."
Comet  Thatcher Yearly Attack on Earth: The Lyrid Meteor Shower:
Debris from the Thatcher Comet are called Lyrid meteors. According to NASA, every year in late April, Earth passes through a stream of Lyrid meteors, which has been happening for at least 2,600 years.
Dust from Thatcher's Comet hit the Earth's atmosphere at 110,000 mph and disintegrate in a flurry of meteors; most years the meteor shower creates about 15 to 20 Lyrids per hour, according to NASA.
More: Slamming into the atmosphere at nearly 110,000 miles per hour, 15 to 20 meteors per hour could shower the night sky and produce some fireballs. The annual skywatching event peaks on April 21st, 2012.The Science and history of Thatchers Comet at NASA  Link