Japanese nuclear plant accident in Fukushima: weather, the spread of radioactivity has reversed towards Japan Mainland.
Current Weather forecast for Japan Fukushima region:
Still is weak ridge of high pressure influence. A low pressure development is underway on the Korean peninsula. This low moves northeast in the wake of the Japanese Sea. Japan entered his sphere of influence. A massive front is controlled here on Saturday from the southwest of Japan, bringing some heavy rain. Only on Sunday eased the situation, it can be expected only at times of rain.


Friday
Today there are only local rain showers. The wind was blowing moderately, partly to life in coastal areas from southeast to southwest.

Saturday
Spreading from the southwest part from heavy rain that can bring large amounts of rain. Also, thunderstorms are in the process. The wind blows from the southeast to southwest lively temporarily, after front passage increases from southwest to west. Small Leetiefs on the east coast of Japan may in the troubled region but the wind can blow at times also from northeast to southeast - and from the Pacific.

Sunday
It is anticipated an interim improvement. Only in places there are rain showers in many places it is dry and the wind will come back weaker and increasingly from south to southwest. (Especially for the Tokyo area). To the nuclear power plant there can be temporary but light winds from the northeast to southeast.

The color scale is currently showing a total of 5 colors. The "Area A" (purple color) defines a region with a maximum load of 0.3 micro Sievert per hour. This value is the maximum dose rate of natural background levels. When "Area B" (blue) would be to load 3 Micro-Sievert, until at,, Area E "at a value of 3 milli-Sievert per hour finally arrives, what assessment the highest effective dose rate in a 25x25 km 2 box around the power plant is a. Because the present data, it is assumed, that the true values ​​in Japan are currently no means over. In the presence of other available data this chart will be adapted accordingly.
Please note that the radiation exposure decline in the crisis region. The effects of the accident have been reduced so significantly.
The color scale shows a total of five colors. , Area A "(purple) is meant to mark in area with maximum dose rate of 0.3 ╣ Sv / h, Which Corresponds to the amount of natural background radiation dose." Area B "(blue) marks a region with 3 micro-Sievert per hour. Finally, one arrives in "Area E" with a maximum dose rate of 3 milli-Sievert per hour. This dose rate is currently certainly not exceeded in the regional area (25x25 km 2 box) around the NPP. Irrespective of the assumed emissions, the maximum value of the model is always used to Determine "Area E".
Please keep in mind that, due to the decreasing level of radioactivity in the crisis region, the actual area of ​​influence is likely much smaller than the one Displayed here. 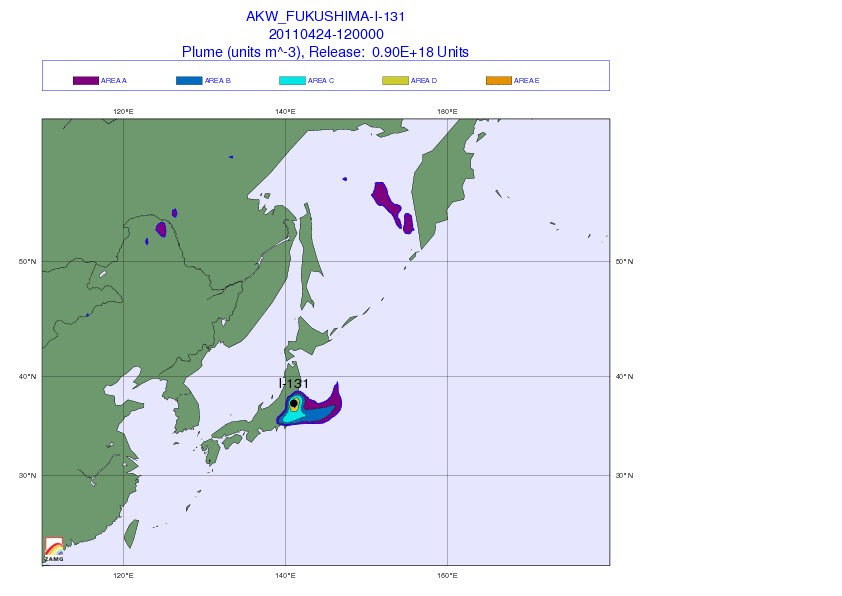 UPDATE AS OF 12 P.M. EDT, FRIDAY, APRIL 22: Below is a round-up of noteworthy news that happened this week with regard to the Fukushima Daiichi nuclear plant and the U.S. nuclear industry's response.