Announcement of the Passing of LAFD Firefighter Glenn L. Allen 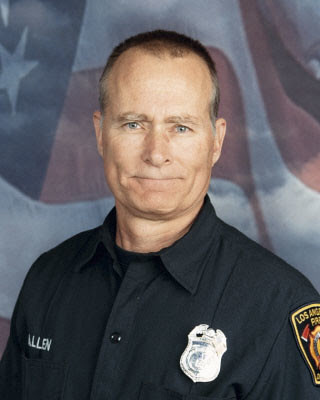 As dictated by Fire Department policy, a formal and detailed investigation is underway to determine the exact nature of the cause of injuries sustained, as well as the precise cause and manner of the Firefighters death.

The men and women of the Los Angeles Fire Department thank you for your kind words and sentiment at this time of overwhelming sorrow and immense loss.

The Allen Family and the Los Angeles Fire Department has received a tremendous outpouring of support during this difficult time. Your Firefighters wish to thank you and express our deepest appreciation for all the kind words and gestures that have been provided.

Glenn L. Allen was a Firefighter/Paramedic for over 36 years and last served at Fire Station 97. He is the 61st Los Angeles Firefighter to have died while directly involved in emergency operations during the Department's 125-year history. The Mayor of Los Angeles has ordered all City flags lowered to half-staff in Firefighter Allen's honor.