The US Bank Tower, located in downtown Los Angeles, is the tallest building west of the Mississippi. It stands more than 1000 feet tall with 75 stories and a total of 1,500 steps.

The Ketchum-Downtown YMCA, which is located inside the US Bank Tower, holds an annual charity event to raise money for kids, teens and adults. It is a growing event which raises money for preschools, teachers, school supplies, youth programs, college counseling and senior fitness programs. 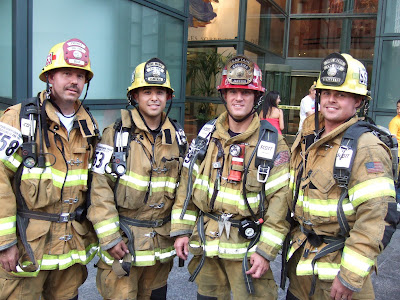 From Left to Right:
Engineer Jeff Silva ~ FFII Medic Steve Ismerio ~ Captain Josh Janssen ~ FFII Medic Steve Leverette
On September 24, 2010, the San Bernardino Unit (BDU) Fire Personnel listed above returned to Los Angeles for the 2010 Ketchum-Downtown YMCA Annual Stair Climb. This is the fourth consecutive year that our Unit has participated in this event. The first year we participated in the event, we were the only CAL FIRE Team. This year there were nine CAL FIRE Teams and several other Fire Department Teams from all across the State. Most individuals train for months to be able to climb this building; And they only wear workout gear and tennis shoes. A few years ago they (Ketchum-Downtown YMCA) decided to add a "High Rise Heroes" division to honor the Fallen FDNY Firemen. This entails completing the event in full Structure Fire Protective Equipment that the members of FDNY were wearing during their climb up the Twin Towers (9/11/2001). The equipment adds around 60 lbs. to that of your body weight. This year we completed the event in right at 40 minutes.
As you can see, the view from the top is amazing. 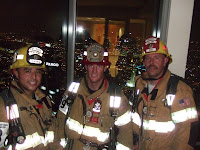 The events total dollar amount raised this year was $281,290.00.
Congratulations to all whom participated !