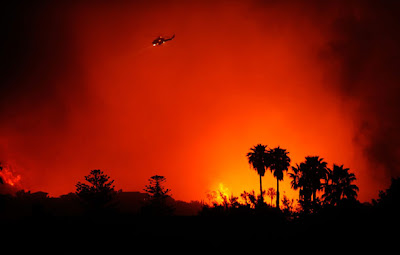 Firefighting Helicopter drops water in a canyon on the Jesusita fire

The U.S. Forest Service is considering allowing its helicopters to attack wildfires at night, a practice the agency has long discouraged because of risks to pilots, a senior official said Monday.

The change would be a major shift for an agency with more than 10,000 firefighters that manages 200 million acres of public land.

"We are in the process ... of one more time taking a look at night-flying operations. But we will have to make sure that those operations, before we change our policy, are worth the benefits," Harbour told The Associated Press.

"Night flying is a risky operation," he added.

Last week, the Los Angeles County Board of Supervisors pushed for broader use of night flying after a wildfire in Angeles National Forest last summer burned more than 250 square miles, destroyed 89 homes and led to the deaths of two firefighters.

Harbour said the Forest Service experimented with night flying against wildfires in the 1970s and early 1980s but abandoned it after a helicopter collision.

The Forest Service has been criticized by some local officials for the way it managed the blaze in Angeles National Forest, which became the largest fire in Los Angeles County history.

The county Fire Department concluded in a report that experienced county helicopter pilots could have made water drops on the first night of the fire - although it conceded that it was not known if that would have made a difference.

In addition, Los Angeles County Supervisor Mike Antonovich has said the Forest Service erred by not calling in more aircraft to drop water and fire retardant in the early hours of the blaze.

The Forest Service can allow pilots from local agencies to fly on its land at night in some cases, Harbour said. But a federal review this month found the Angeles Forest wildfire raged out of control because it jumped into inaccessible terrain, not because the Forest Service failed to deploy enough firefighters and aircraft.

Harbour said there were scant cases where aircraft alone extinguish fires, since embers, brush and grasses on the forest floor can continue to burn even after a water or retardant drop.

"It's a red herring to keep talking about helicopters and air tankers," Harbour said, referring to the same blaze.

Los Angeles County Fire Chief P. Michael Freeman said he supported the federal review. He believes pilots qualified to fly at night should be able to do so, if the possible gain outweighs risks - regardless of whether they are from local or U.S. agencies.

County pilots can fly at night on Forest Service land, but only when structures are threatened and within a two-mile wide zone along the park boundary.