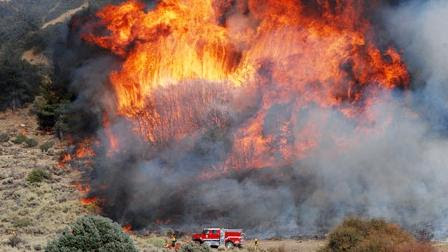 Flames roar up a mountainside that firefighters ignited in order to keep the Sheep fire away from a ski resort, Sunday, Oct. 4, 2009 in San Bernardino, Calif.. Gov. Arnold Schwarzenegger declared a state of emergency for San Bernardino County, freeing up state resources to battle the fire. (AP Photo / Mike Meadows)

WRIGHTWOOD, Calif. (KABC) -- Investigators say a wildfire that burned more than 11 square miles in the San Bernardino National Forest near Wrightwood may have been deliberately set.

Investigators say it was human caused, and may have been arson.

One home and four other structures were destroyed in the October "Sheep Fire."

The fire also forced the evacuation of Wrightwood.

Investigators have ruled out downed power lines, lightning, or other causes.

The starting point was near Lytle Creek and Sheep Canyon roads.

Investigators are asking anyone who may have seen suspicious activity in that area on October 3rd to contact authorities.