Currently being updated at 10:00 am 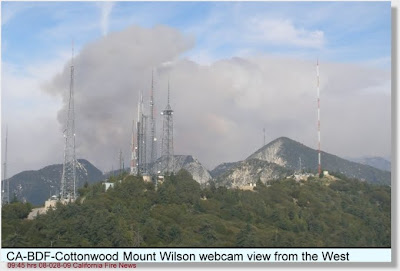 GLORIA CA-BEU-2830; San Benito-Monterey Unit, Cal Fire. 5,000 acres, 15% contained. Four miles east of Gonzales, CA. Brush and grass. Active fire behavior with long-range spotting. Residences and major transmission lines threatened. Highway 146 closed. Evacuations in effect.
The fire continues to spread to the southeast and Hwy 146 is closed. 100 homes and 50 commercial properties are threatened, and one resident was destroyed. The fire is threatening the 230 KV transmission lines that provide power to the King City Basin and the San Ardo Oil Fields. It could reach the Pinnacles National Monument within the current operational period.

COTTONWOOD CA-BDF-11578, 1,000+ acres, 5% containment Forella’s SOCAL TEAM 3 is being mobilized to this incident.
Mandatory Evacuations--for Willow Brook Rd. in the Val Vista Area east of Hemet. Voluntary Evacuations--A dozen homes (five people) were evacuated under voluntary evacuation in Bee Canyon Thursday.,
C3101 requested 10 closest engines for Structure Protection in the area of wellington and 74 this AM. The Fire is approximately 1 mile east of Cranston and 10 miles east of Hemet in the San Jacinto Mountains and is currently at 1000 acres. Overnight, the fire grew in the north and northwest corners.
The Big Bear Hotshots completed a successful firing operation on the eastern flank of the fire, which is holding, preventing growth toward Idyllwild. Additionally, crews worked throughout the night with dozers and firing operations to reduce the risk to the homes along Highway 74.
The western flank of the fire is showing the most activity, burning in 11-year-old fuel type with a lot of dead component. Firefighters face the challenge of very rocky and steep terrain. Webcam link 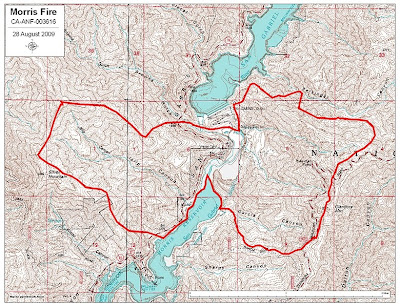 BRYSON 2 CA-BEU-002816; Started 08/26/09 at 1326 hours. San Benito-Monterey Unit, Cal Fire. The fire has burned 2,754 acres and is 60% contained. Twenty miles southwest of King City, CA. Brush. Moderate fire activity. The fire is expected to be contained 08/28/09. At this time the forward spread has been stopped, personnel are working to complete control lines, little spread is expected.