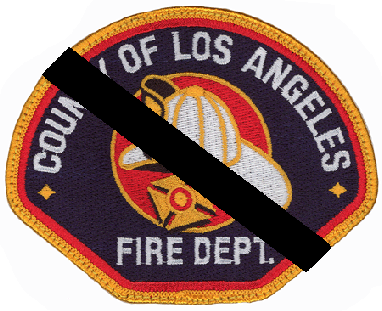 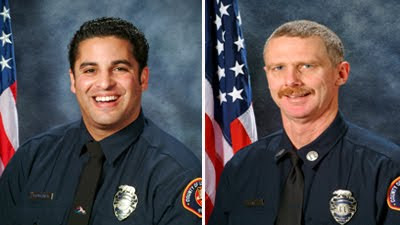 Station Fire LODD Update: IC / PIO Station Fire announced that 2 LACo Firefighters are LODD as a result of the vehicle they were in going over a cliff.

It has been reported the Firefighters were fleeing LACFD Camp #16 on Mt. Gleason as it was being over-run by extreme fire behavior. Four injuries have been reported.

State corrections officials said it appeared the two firefighters may have died while searching for an escape route for three corrections workers, other fire personnel and 55 inmates who rode out the fire inside the camp's dining hall as flames fiercly approached the area.

Hall and Quinones were repositioning their truck on the small path near the camp when for some unknown reason it plunged some 800 feet over the side of the road into a canyon.

It's believed the truck may have been overrun by fire prior to the accident.

WFF honors those who have been killed protecting our lands, homes and family, Honor the Fallen www.wffoundation.org

It is with our deepest regret to inform you of the Line Of Duty Deaths for Fire Captain Tedmund "Ted" Hall and Firefighter Specialist Arnaldo "Arnie" Quinones. These two members tragically lost their lives when the where overran by a fast moving fire which approached Fire Camp 16 on the "Station Fire" Incident.

Funeral arrangements are pending and information relating to services will be made available in the near future.