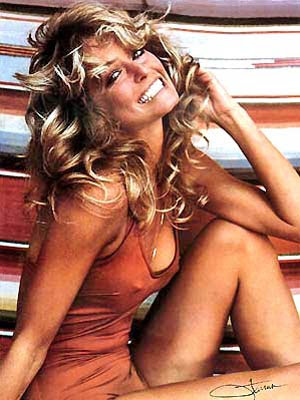 Farrah Fawcett: Forever Young
Generation X's favorite pinup
The Poster: Farrah Leni Fawcett-Majors (at the time, her hyphenation made her seem only more unattainable and therefore, more desirable) was also a guardian angel of sorts, watching us from the walls of our bedrooms, listening as we stumbled through first forays into adulthood: young love, illicit sips of beer. It was easy to pretend that the radiant blond with the mouthful of pearly whites was tossing her head back and effortlessly laughing at something we'd said.

It's impossible to imagine a poster today being as beguiling and mysterious. The photo seemed as if it had been taken almost surreptitiously (on a beach in Cancun?), a woven blanket in the background. The rustred one-piece swimsuit seemed damp and noticeably cool, and a thin gold chain around her neck dipped into her décolletage. She was seated, her left arm resting on her left knee, her left hand tousling her own hair, her head tilted back at a 45-degree angle from the camera, a smile so wide and bright that by today's standards it's full-on caricature. The shot looks ever so slightly exploded -- as if someone had enlarged what should have been a much smaller print.

Today we know that the poster image was shot by freelance photographer Bruce McBroom on behalf of a now-defunct Ohio company called Pro Arts Inc., using a Nikon-F camera. He took it in early 1976 near the pool at the Bel-Air home Fawcett-Majors shared with her then-husband, when she was 29 and had not yet made her TV debut as "Charlie's Angels" crime fighter Jill Munroe (that debut came on Sept. 22, 1976, around the same time the poster was released).

There was no stylist -- Fawcett-Majors did her own hair and makeup. And the Indian-blanket backdrop was a last-minute addition the photographer grabbed from the front seat of his '37 Chevy. The subject of the photos decided which shot would become the poster. She would eventually own the copyright to the image as well.

By March 1977, it had sold 5 million copies. Today that number is north of 12 million, and no one else of her era has come close to being a swimsuited paragon of pinup pulchritude -- not Bo Derek running the beach to the strains of Ravel's "Bolero," not Cheryl Tiegs in her see-through fishnet suit and not Pamela Anderson and her pneumatic ilk prancing through the waves. In 2007, GQ magazine named the poster "the most influential piece of men's art of the last 50 years," and a copy of it is among the holdings of the Smithsonian.

But for years now, she's been enshrined someplace much more intimate and meaningful: in the bedrooms, prom pictures and salon chairs of an entire generation that grew up with a definition of female beauty defined by the blond with the tousled mane and megawatt smile.

She will always be our favorite Angel.