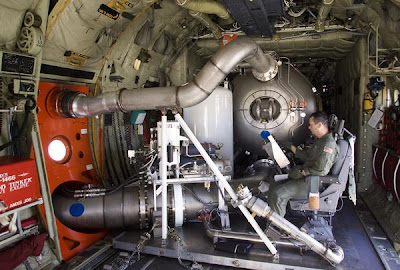 The next time a wildfire breaks out in Southern California, local firefighters will have some new tools at their disposal.

After a four-day training session this week in Port Hueneme, Air National Guard pilots will be able to drop vastly increased amounts of fire retardant more quickly and accurately from their cargo planes when firefighters call for assistance, officials said.

In development since 2000, a prototype model of the new system was used in firefighting missions around California this summer. Forest Service officials picked up two of the final models Friday and used them during this week’s training session with the Channel Islands Air National Guard, said Lynn Ballard, a spokesman for the Forest Service.

Six more units are expected to be ready for the agencies’ annual firefighting training in May.

The MAFFS 2 units are essentially removable fire-retardant cartridges for the Air National Guard’s newest C-130 cargo planes. Designed to roll into and out of the planes, the units include tanks that can hold up to 3,000 gallons of retardant and air compressors to spray it out of large nozzles on the planes’ sides known as “pimples,” Ballard said.

Air National Guard crews are spending much of this week training with the new units so they are available as soon as possible, said Air Force Lt. Col. Bill Willson.

The training exercises, expected to run through Thursday, include about 120 people from agencies including the National Guard, Forest Service, California Department of Forestry and Fire Protection, the Los Angeles and Kern County fire departments and Aero Union Corp., manufacturer of the firefighting units.

The Channel Islands Air National Guard Station lost its old MAFFS in September 2006, when it switched to a new model of C-130 incompatible with the old system, Ballard said.

The Air National Guard faced criticism in 2007 after its C-130s were among firefighting aircraft that remained grounded during the early hours of a disastrous series of wildfires in California.

The new firefighting units have a number of advantages over their predecessors, officials said. For example, the built-in air compressors make the MAFFS 2 much more versatile, officials said. They allow the plane to refill at airports that don’t have special compressors on the ground. The compressors can take up to 35 minutes to recharge, but that beats hours of commuting to and from a military base, Ballard said.

The pimple feature allows a plane to spray a dense stream of retardant onto fires, which works better in heavy timber, Ballard said.

The new system also allows pilots to control the amount of retardant they spray, instead of dropping it all at once, Willson said.

“With the new airplane and the new system integrated into it, it makes flying the airplane safer, more efficient and quicker to combat forest fires,” he said.