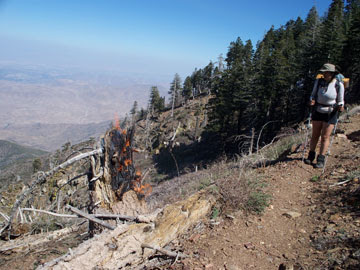 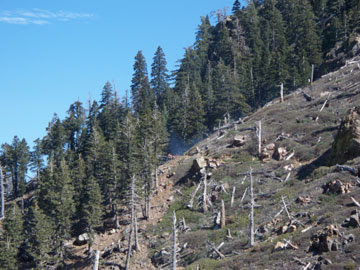 Picture of Apache fire - Hiking away after discovery
Credit: Bobby Wisnouckas, a PCT hiker, who was first to discover the fire.

Bobby Wisnouckas and fellow hiker, Steffie, tried to shovel sand on the fire, but the winds were too strong at that altitude and the fire quickly moved to the grass and then to the logs downhill from the stump

Tuesday afternoon, April 29 Apache Fire is reported by Two Pacific Crest trail hikers as a burning stump and is now about 700 Acres.
Rapid ROS, 40 mph winds, smoke, heavy downed timber, moving into brush.
The high ROS and steep terrain have made accessing fire difficult. A hotshot crew and 4 strike teams of CalFire crews (8 crews) are working the fire in very steep terrain today.
Aircraft have been grounded due to high winds and a heavy marine layer limiting visibility.

GACC-South Ops 4-30 1200hrs:CA BDF-005147 CA BDF-005147 Apache . Joseph's – SO CAL type II team is being Mobilized to this incident and tentatively transitioning by 1800 todays date.
Fire is 700 + acres 0% percent containment with a potiental to burn another 2000 to 5000 acres . Fire continues to burn at rapid rates of spread in heavy down logs and timber moving into grass and brush and is a threatening Agua Caliente Reservation, the San Jacinto wilderness, and the Santa Rosa-San Jacinto National Monument. This incident is in deep and inaccessible terrain, with high winds over fire, and is inaccessible to resources due to steep terrain, aircraft have been grounded due to high winds over fire 25 mph plus. fog at lower elevations also grounding aircraft.
Posted by Bob Blogger at 4/30/2008 08:38:00 PM