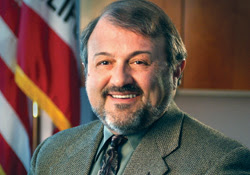 During his 20-year career at the Oakland Office of Emergency Services, Henry R. Renteria saw more than a lifetime of natural disasters - from the 1989 Loma Prieta to the fast-spreading 1991 Oakland firestorm.

Appointed in 2004 by Gov. Arnold Schwarzenegger as director of the California Governor's Office of Emergency Services - the state's top emergency management post - Renteria oversees emergency services for 38 million residents living in what's arguably the most geographically complex state in the country. He is a past president of the California Emergency Services Association, and helped launch the state's first public-private partnership initiative to support emergency planning and response.

With the different potential disasters in California - earthquakes, fires and floods - how does your agency manage effectively? The California Office of Emergency Services, with other state agencies, is now more proactive and has a forward-leaning when responding to events. In the past, the way the emergency management structure has always been followed is that all disasters are local; they all start at the local level. The state was here to provide systems if the local government couldn't handle something.

That has changed over this administration. Gov. Schwarzenegger is very proactive. He's an action-oriented guy, and he made it clear to me that when something happens, regardless of the event's size and where it happens, we need to be on top of it immediately.

When you say your agency is being "proactive," is there a technological component to that improvement? Yes - everything from communications to warning systems. We have a 24-hour state warning center that's now connected to every local government and county in the state. When something happens, we can instantly send a warning message or communication request back and forth with that local government.

For example, this past weather emergency, we knew, because of our communications with the National Weather Service, that we were in the position to receive three winter storms in a row. We were able to identify the severity of those storms based on actual weather service intelligence and information they gave us.

We were in direct communication with all the first responders, special districts and with the public to get everyone ready for those storms. In the past, we depended on the media to send this [message] out or local governments to use their own resources. Now we're all talking to each other.

Did improved communications capabilities hold true during the 2007 San Diego wildfires? Comparing the [Oakland] firestorm in 1991 to this 2007 similar firestorm: The reverse 911 was used in San Diego - was a real plus in warning large populations about the firestorm's severity and the need to evacuate.

In 1991, local government was taken somewhat by surprise because that fire rekindled the next morning. Due to the weather conditions, it quickly went out of control. You were also dealing with an urban fire department that wasn't trained in fighting wildland fire. That's another issue, but the point I'm making, again, is there was no alerting and warning system in place in Oakland when that fire occurred. Whereas in San Diego, it was organized by local government and reverse 911 was used for evacuation.