Meanwhile, officials from the state Occupational Safety and Health Administration were at the scene looking into the cause of the accident. 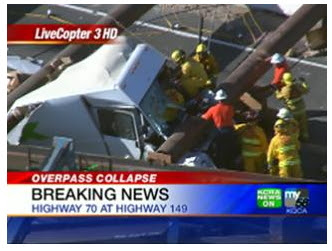 Full collapse of highest span; scene very unstable; one vehicle with patient
under rubble; other patients have been extricated and are en route to
hospital.

Continuing on stabilizing site; rescuer with patient that is trapped;
patient is stable. Flight Care is available at scene due to time involved
in extrication.

Per KCRA, One patient
transported to Oroville with what were being described as Serious
injuries, and one patient left inside of a FedEx truck.

FedEx driver is alert and talking with rescuers at this time.
Victim has been extricated; Cancelled request for a
surgeon, Code 3.

News interview with
one of the crew confirms that amputation was an option to get him out as his
vitals were declining rapidly.

He's on his way to Enloe with severe lower limb injuries.

Additional:
70 north and south are open; 99 was closed at 169 because of the extremely
heavy traffic, not sure if now open.

BUTTE COUNTY, Calif. -- Support beams for a bridge project along Highway 170 north of Oroville collapsed Tuesday morning, crushing a FedEx truck and trapping the driver inside.The bridge is being built along a stretch of highway at the junction of Highway 149.The California Highway Patrol said incident was reported at about 7:18 a.m.

The California Department of Transportation said some steel false work used to support the project fell down on the road below, trapping the delivery truck.The driver of the truck was alive and was seen talking to rescue workers. As of 9:30 a.m., dozens of rescuers were at the scene, with many climbing up on the truck in an attempt to help the driver.Officials said each of the steel beams sitting on the truck weighs several thousand pounds.Authorities said a construction worker was on top of the false work at the time of the collapse. He rode the steel down to the ground and was injured, but officials said he will likely survive.A secondary crash involving a Caltrans truck took place a short distance south of the bridge collapse. It was not clear if anyone was injured in that incident.