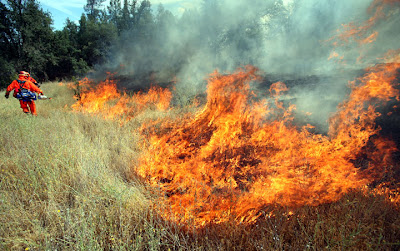 
A wildfire that threatened close to 100 homes in a subdivision between Clear Creek and Texas Springs roads was half contained at 6 p.m. today.

Full containment of the 200-acre Creek Fire is expected at midnight, said Doug Wenham, a state Department of Forestry and Fire Protection spokesman.

While the closure of Texas Springs Road was lifted about 5:30 p.m., he said, an evacuation order for neighborhoods south of the road was expected to remain in effect until 8 p.m.

Because of heavy equipment and firefighters on the roadway, Wenham said, Clear Creek Road probably will be closed throughout the night between Honeybee Road and Cloverdale Road."
Posted by Bob Blogger at 6/29/2007 08:43:00 PM