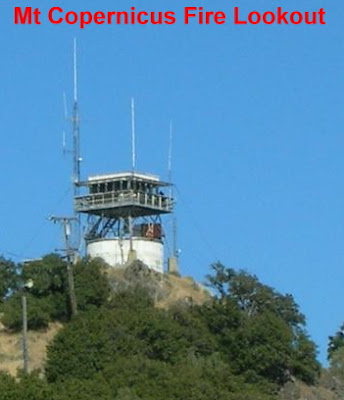 A fire lookout in Santa Clara County that has been closed for 17 years will reopen this week, Cal Fire officials announced today.

A 2-and-a-half-year-old volunteer project resurrected the lookout, which will not only preserve one of the Santa Clara Unit's historical places, but will recognize Cal Fire's 100-plus years of service.

Volunteers will staff the lookout on an as-need basis during red flags, high winds, after lightning storms and on high-fire danger days.

The Copernicus Peak Lookout is located a half-mile east of Lick Observatory. The lookout was constructed in 1938 and served as one of several fire lookouts within the Santa Clara Unit, a 1.4 million-acre stretch."
Posted by Bob Blogger at 6/12/2007 09:42:00 AM

Follow @CalFireNews Tweet to @CalFireNews Tweet
****REMINDER**** Every fire has the ability to be catastrophic. The wildland fire management environment has profoundly changed. Growing numbers of communities, across the nation, are experiencing longer fire seasons; more frequent, bigger, and more severe, fires are a real threat. Be careful with all campfires and equipment.