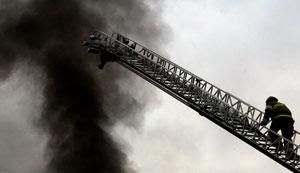 Alvarado Street stays closed after fire guts building.
Monterey city officials are scrambling to allow the reopening of as
many Alvarado Street businesses as possible after a late-night fire
destroyed a 101-year building that housed 21 businesses.

From the Monterey Herald
Alvarado Street stays closed after fire guts building
Monterey city officials are scrambling to allow the reopening of as many Alvarado Street businesses as possible after a late-night fire destroyed a 101-year building that housed 21 businesses.

City officials said they hoped to get power restored to lower Alvarado Street, north of the 400 block most impacted by the 10:15 p.m. fire, as soon as possible.

PG&E crews were working on damaged equipment in the middle of the street at 9:30 a.m. as firefighters continued to pour water on the burned-out building to quell hot spots.

City Manager Fred Muerer said businesses in the 400 block wouldn't be allowed to reopen until the burned building is braced and a protective wall is built to prevent its scorched walls from collapsing into the street.

City officials also are working on plans to re-route traffic around the block and to ensure that pumps that carry storm water from downtown don't become clogged with fire debris.

They also urged residents not to go near the fire area just too watch. "We have many more important things to do than hustle lookers away," Bill Reichmuth, the city's public works supervisor.

Fire officials said one firefighter was treated for a cut to his hand while fighting the blaze.

Among the businesses destroyed on the 400 block of Alvarado were the downtown Starbucks and a Quizno's restaurant.

Other businesses damaged were Goomba's, Kaiya boutique, Futons and Such, as well as upstairs service businesses that include an income tax preparer, an environmental consulting business and a computer repair shop.

Curtis Gandy, who is the executive director of the Fort Ord Toxic's Project, said he was upstairs in his office when he heard the commotion on the first floor.

Gandy, whose business has been in the location for about five years, quickly grabbed cash receipts and his shoes. Computer equipment along with legal documents were left behind.

He said he handed keys to the building to responding firefighter's as he fled the building.

"I saw the smoke rolling out," said Gandy, who watched the blaze across the street with other onlookers early Thursday.

Officials said the fire started either on the first floor or the basement nearest Quizno's and smoke moved quickly through the other stores.